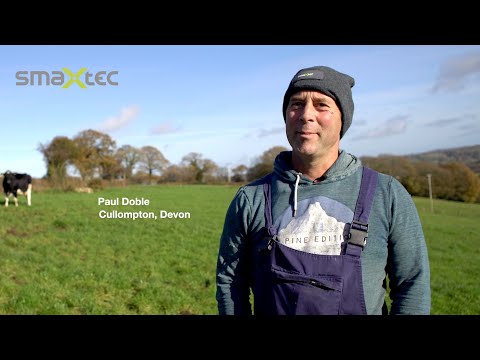 One of the main benefits of the smaXtec system is the health side of things. Paul Doble uses smaXtec in particular as an “early warning system” for his 95 cow herd to help him pick up issues early, take preventive measures and reduce use of antibiotics. “With smaXtec we are picking up health issues 24 to 36 hours before there is actually a problem.”Paul Doble reports. When the farmer or his relief milkers receive an alert they check if the cows eat their blend, strip all four quarters and if necessary pump them with water and electrolytes. This way they do not have to use antibiotics.

What Paul Doble thinks of the smaXtec calving alerts? “The calving alerts are brilliant, because in wintertime when they are in the cubicles if you get a calving alert you put it in the calving pen. And it’s very accurate.” the farmers ays. This way they can calve on a warm straw bed. “As far as welfare goes, it’s a lot better.”